The upcoming exhibition of Ralph Eugene Meatyard’s The Unforeseen Wilderness celebrates the recent acquisition of a remarkable portfolio of 56 photographs depicting Kentucky’s own Red River Gorge.

In 1967, the Army Corps of Engineers received approval from Congress( to dam the Red River in east-central Kentucky in an effort to control decades-long flooding in the area. In response, the University Press of Kentucky commissioned poet and essayist Wendell Berry to write a book advocating the preservation of the Gorge in its natural state and engaged Lexington photographer Ralph Eugene Meatyard to produce photographs to accompany the text. Meatyard’s photographs, one of the first photographic attempts at environmental conservation in the American South, played a vital role in the decades-long effort to preserve the Gorge.

In 1979, Tanya Amyx Berry was given a camera by New Farm magazine to capture images of Kentucky farmers at work. Over two days at the farm of Owen and Loyce Flood in Henry County, she recorded the culmination of a year’s labor raising livestock. These photographs have recently been published for the first time in a new book by University Press of Kentucky.

In Tanya Amyx Berry’s “For the Hog Killing, 1979,” these compelling photographs, accompanied by an essay and poem from Wendell Berry, illustrate the American agrarian practice of neighbors gathering to perform one of the most ceremonious jobs of farm life and the communal effort toward a common wealth.

Posted at 11:03 AM in Books, Photography, Publication | Permalink | Comments (0)

Wendell Berry on the Photography of Ralph Eugene Meatyard

This is the “Note” by Wendell Berry found in Ralph Eugene Meatyard (1970):

Association for several years with the work of Gene Meatyard has become one of my crucial experiences. It has kept me involved — and willing to be involved — in a sort of fundamental disturbance like an earthquake, unsettling, for sure, but at the same time giving evidence that something lively is going on in the world. Looking at his pictures, I am aware that my basic assumptions about reality are being tampered with. I am being nudged, forcibly and a bit gleefully, by the possibility that what we have taken to be reality is a mere social convention, going out of date. I turn from the photographs to my surroundings, feeling that what I see is not all that is there.

More than that of any other artist I know, this work alerts me to the fact that we have arrived here at this moment by ways that are mostly unknown to us. The configuration of the images in many of these pictures has clearly been produced by a plot as elaborate as that of any novel, but the plot is not in evidence. It is not withheld deliberately; we are not dealing with a trick of “suspense,” but with real mystery. The plot is not given because the photographer does not know what it is any more than we do. I think that he is able to produce such vivid images of how our experience is because he accedes so absolutely to the mystery of why.

With the help of the good folks at The Berry Center, we have received from photographer Guy Mendes a delightful photo for use in the Wikipedia article on Mr. Berry. Mr. Mendes has very generously released this photo under a Creative Commons license which allows the photo to be widely used.

I am also very thankful to photographer David A. Marshall, who created and donated the previous (and original) photo of Mr. Berry reading at Indiana's Frankfort Library in 2004 or 2005. 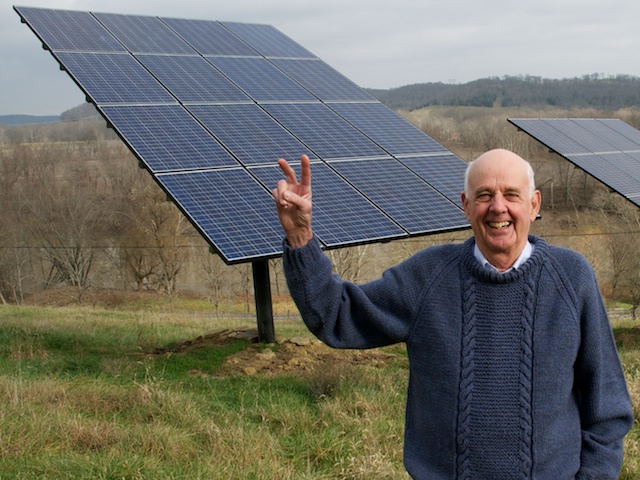 See the photo at Wikimedia Commons.