An interview with theologian and Wendell Berry scholar Norman Wirzba

tout (verb): attempt to sell (something), typically by pestering people in an aggressive or bold manner
This morning found me promoting (if not exactly attempting to sell) Wendell Berry's essay collection, A Continuous Harmony. First published by Harcourt, Brace in 1972 and subsequently by Shoemaker & Hoard (2004) and Counterpoint (2012), it is now fifty years old. The other day I pulled it from the shelf thinking that it's probably among the lesser known of his volumes, but that's hard to say. At any rate, this is what I did on Twitter. 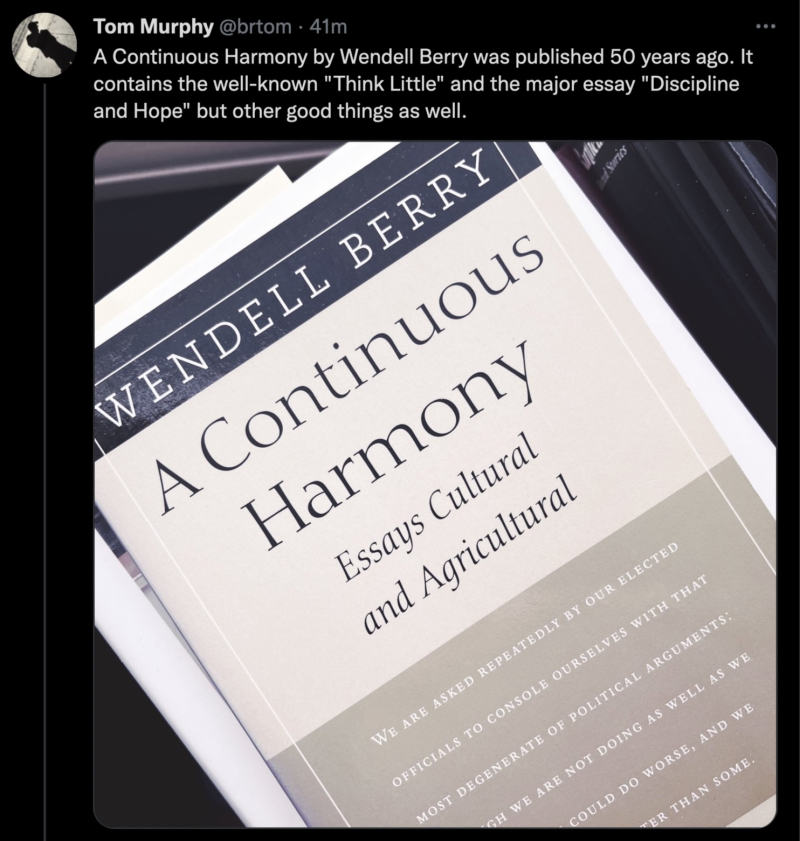 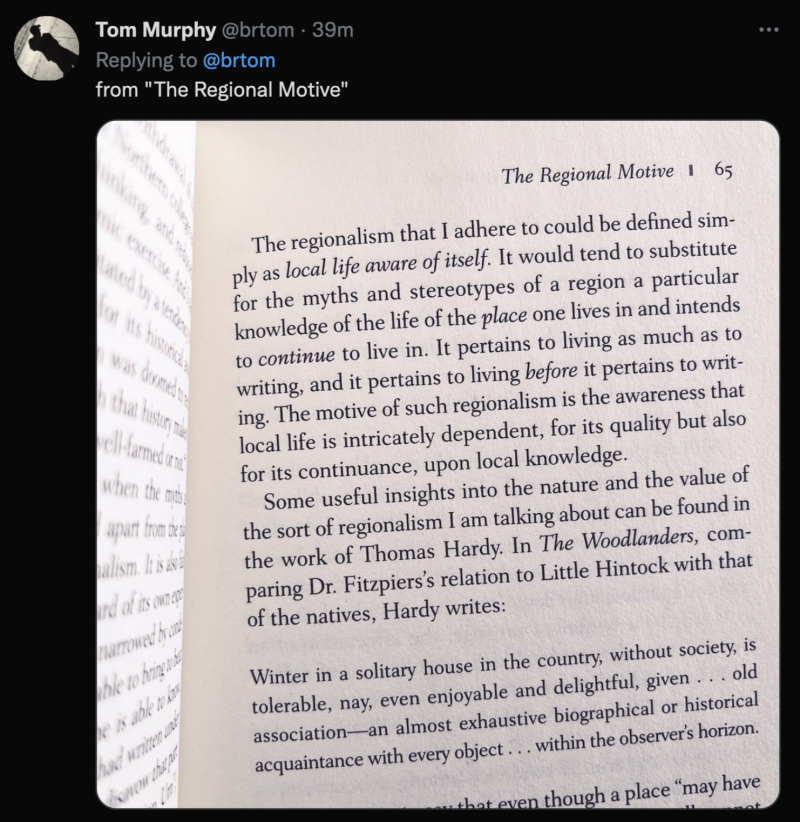 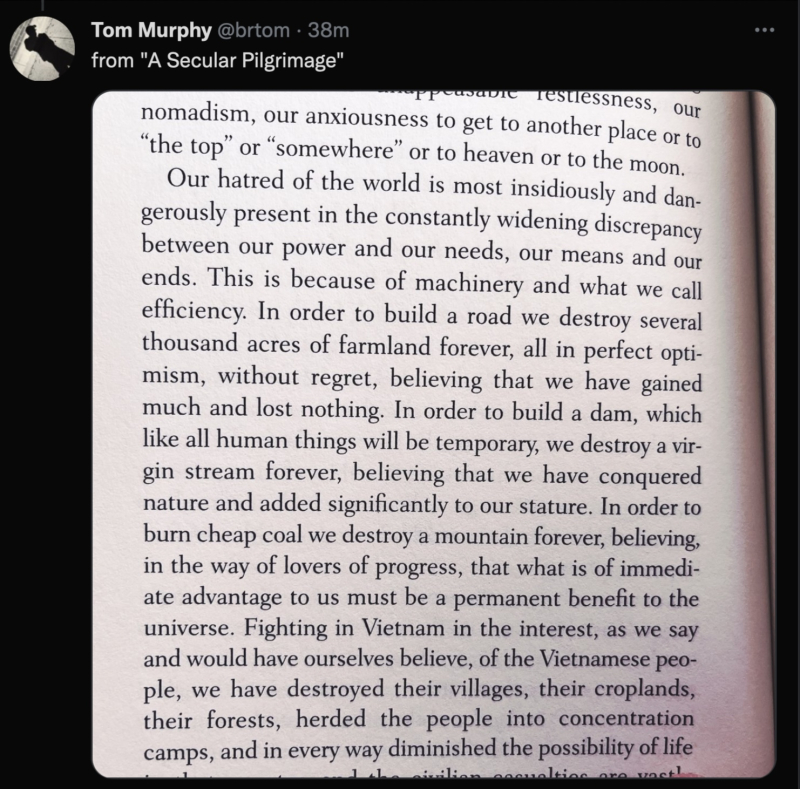 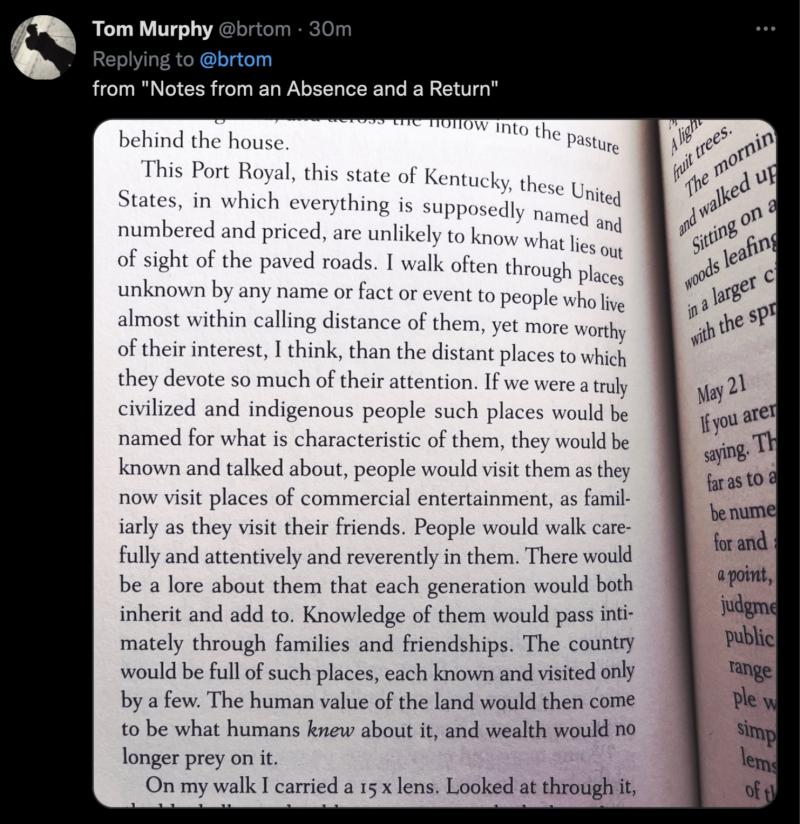 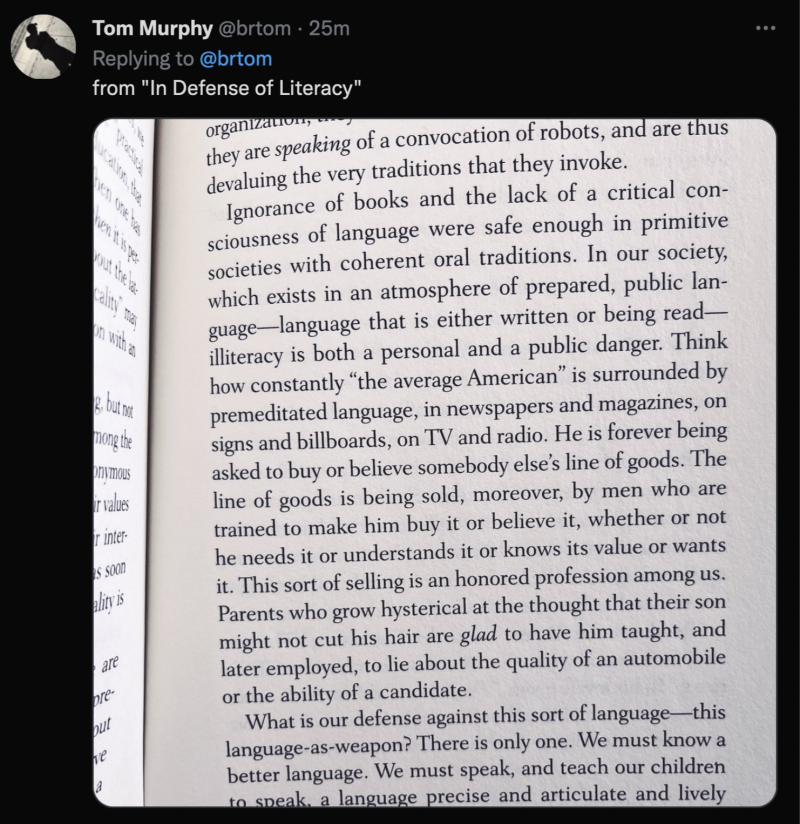 And this was followed by a link to Counterpoint's page for the book. So I guess that I actually was trying to sell a few copies.

The Membership is a podcast inspired by the life and work of Wendell Berry, the Kentucky farmer, poet, novelist, essayist, activist, and thinker.

Our goal at The Membership is to curate great conversations that contribute to the health of the land and the health of our communities.

Join hosts Jason Hardy, John Pattison, and Tim Wasem as we discuss Berry's life and writings. We’ll also interview other folks—farmers and makers, writers and artists, and community practitioners of all kinds—who are responding to Wendell Berry's writings in their own places.

Visit The Membership and sign up to receive updates.

Matt Stewart responds to a range of responses to his original essay "Stop Talking about Wendell Berry on Twitter":

It is true that the glass is decidedly half-empty in this analysis and that I risk hyperbole. But if the readers of Wendell Berry do not speak forcefully and often about the costs of our digital world, who else will? Who else can be counted on to simply reject, at times, these new “necessities?” Who else will remind us that we have options beyond either a grim realism that just accepts the tools that we have at hand and a shallow techno-utopianism that awaits not a new tool but a talisman? Poor old Twitter ($7.41 billion in total assets as of 2017) and Facebook ($84.5 billion in total assets as of 2017) can defend themselves, and I do not think it irresponsible to indulge in some hostile interrogation of the influence of their products.

I urge my fellow localists to think of their Tweets and Facebooks as analogous to cigarettes or plastic grocery bags. One or two are not so bad and they can even be enjoyable and useful. But they are not designed for moderate use and in the quantities with which we pump them out, a severe reckoning is at hand. I think it is likely that future generations will not look on us kindly as they labor to clean up the digital equivalent of secondhand smoke and the Great Pacific Garbage Patch.

Read all of "A Digital Relation to the Universe" by Matt Stewart at Front Porch Republic.

Find a list of all articles in this series HERE at Front Porch Republic and here on this site.

Look & See is not a romanticized version of the farmer poet, but an invitation to see the hardship, character, struggle, neighborliness and rooted love that makes up the agrarian lifestyle in Henry County, Kentucky. Laura Dunn and her crew made a generous film. I say generous because Look & See freely gave me space to ask the beautiful question – how then shall I live?

Laura and I talk about Wendell and Tanya Berry’s impact on her life, Wendell’s idea of the union of life and art, marriage as a creative partnership, the unspoken farm crisis and its implications for young farmers today, where she finds hope from the Wendell and Tanya Berry and in her community and why are there so many comedians listed in the end credits of Look & See.

Find and Listen to the interview by Paul Swanson at Contemplify. 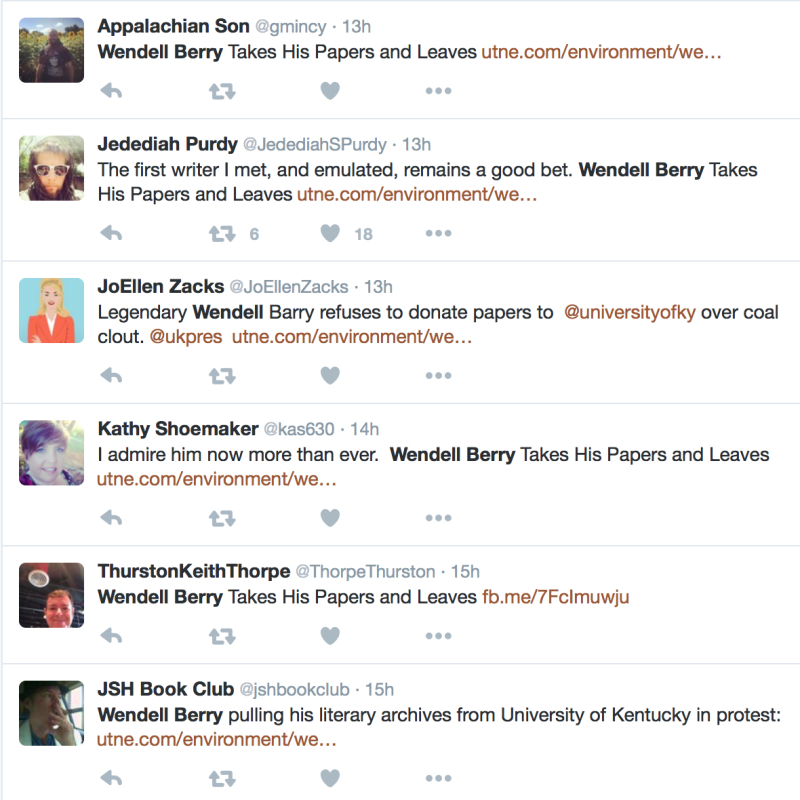 Interview with Laura Dunn about her Wendell Berry film

The Circe Institute's "Quiddity" podcast interviews Laura Dunn, whose film The Seer: A Portrait of Wendell Berry will be premiering at SXSW later this month.

In this episode, Laura Dunn, director and producer of a new documentary about Wendell Berry called The Seer: A Portrait of Wendell Berry, joins the show. Topics include what it was like to get Berry on board with the project, the way forward for communities like the one Berry lives in, and the role of Tanya Berry in Wendell's life and work.

Listen to the interview HERE.

Director Laura Dunn and The Seer production team have begun a Kickstarter campaign to help bring their film about Wendell Berry and his work to completion. Please consider helping out by visiting HERE,

Forty Panes: A Documentary Portrait of the World as Lensed through the Works of Farmer, Writer & Activist Wendell Berry has shared a brief audio excerpt of Mr. Berry in conversation with director Laura Dunn.

Listen to the audio HERE.