James Rebanks wandered into the literary landscape in 2015 with the release of his memoir, “The Shepherd’s Life: Modern Dispatches from an Ancient Landscape.” A sheep farmer from Matterdale, England, Rebanks’ prose about his simple yet fulfilling lifestyle touched many people. His book received rave reviews and landed on The New York Times’ best-seller list.

Practicing a simple life also is a mantra Kentucky author, poet and farmer Wendell Berry lives by, and on Wednesday, Berry will get a chance to interview Rebanks at a free event held at the Louisville Free Public Library. Presented in partnership with Carmichael’s Bookstore, the evening should be a lively one, as two powerful writers discuss camaraderie, tradition and the poetry of rural life.

Renowned and beloved writer and activist Wendell Berry comes to Centre College in November as a Humana/Grace Doherty Library scholar.

Berry will give a convocation address and read from his work on Monday, Nov. 14 at 7:30 p.m. in Newlin Hall in the Norton Center for the Arts. The convocation is free and open to the public with no tickets required. The following day, Berry will discuss his work in a more informal gathering in the Doherty Library’s J. David Grissom Reading Room at 11:30 a.m.

In his critically acclaimed and New York Times bestselling memoir The Shepherd’s Life, rural shepherd James Rebanks revealed a lifestyle kept alive by a few hundred farming families in the Lake District of England to readers around the globe. In the visually rich follow-up, The Shepherd’s View: Modern Photographs from an Ancient Landscape, Rebanks uses his camera lens and nimble prose to invite readers onto the land where his family has worked as shepherds for generations.

Wendell Berry, Kentucky’s own beloved author, poet, and farmer, will interview Rebanks about his books and experiences. Join us as these two powerful writers discuss camaraderie, tradition, and the poetry of rural life.

We are excited to announce that Mr. Wendell Berry, a noted novelist, poet, farmer, and essayist (and recipient of the 2012 Russell Kirk Paideia Prize), will be joining us at our 2017 Winter Regional Conference to read an original story.

This event will take place on January 20, 2017 at 8:00 PM in the Seelbach Hotel in Louisville, KY. A limited number of tickets are available to the public.

The Center has described the event as follows:

On Saturday October 22nd at 7:00 pm, award winning author Wendell Berry and The Land Institute's co-founder Wes Jackson will share the stage at the historic Mahaiwe Performing Arts Center in the heart of Great Barrington, Massachusetts. They will hold a conversation about the 50-Year Farm Bill, their work, and their long friendship and collaboration in support of rural communities.

The occasion is the 36th Annual E. F. Schumacher Lectures, a tradition that Mr. Berry and Mr. Jackson launched when they spoke to a full house in October of 1981 on the theme of People, Land, and Community.  Over the years the Annual Schumacher Lectures have provided a platform for some of the most powerful voices for an economics that supports both people and planet – voices that include Jane Jacobs, Bill McKibben, Winona LaDuke, Van Jones, Judy Wicks, and Otto Scharmer.

Much has changed since the first Annual Lectures. The promise of the global economy has faded in the face of ever-greater wealth inequality and environmental degradation. There is a groundswell of interest in building a new economy that is just and recognizes planetary limits. All of us at the Schumacher Center for a New Economics are delighted that Wendell Berry and Wes Jackson have accepted our invitation to come back and share their perspectives on how far we have come, where we are, and where we believe we should go next.

For more, visit The Schumacher Center for a New Economics.

"Farmers may be the last group even liberals laugh at," Berry, a nationally recognized poet, novelist, farmer and environmental activist, said Sunday morning at the Prairie Festival at The Land Institute.

"But no one, no matter how exalted, doesn't depend on farmers."

Delivering the Strachan Donnelley Lecture on Conservation and Restoration, Berry said farmers have been hindered by government subsidies and overproduction in response to market forces.

"Those constraints and incentives reward poor work and are a waste of resources," he said.

Posted at 10:27 AM in Agriculture, Appearances, Events | Permalink | Comments (2) 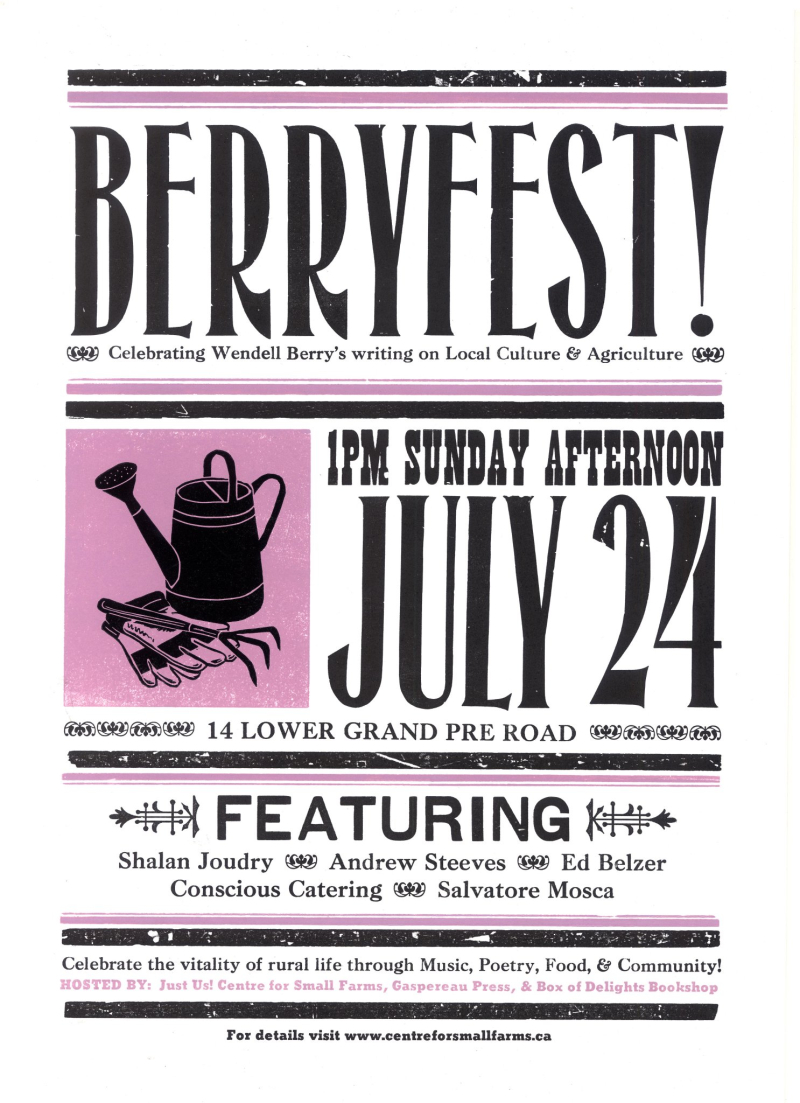 Wendell Berry, sheep farmer from Kentucky, is arguably the poet laureate of agriculture. Seminal writings like “The Unsettling of America”, “The Gift of Good Land”, and “The Mad Farmer Poems” have helped shape a generation of farmers with a philosophy and practice of sustainability. The Just Us! Centre for Small Farms, in cooperation with Gaspereau Press, and The Box of Delights Bookshop look to celebrate the works of Wendell Berry.

More on "The Seer: A Portrait of Wendell Berry"

The film isn’t preachy, it’s showing you that there are people willing to do what is manageable, and what is best for the land and their families.  They describe the desire for farming coming from the passion of successive generations.  There are a lot of threats to this way of life, some unavoidable without a change in our culture.  But if anyone can persuade us, Wendell Berry might be the one.   THE SEER is a thoughtful documentary, told with the same directness as Berry’s writing, with enough hope that you want to see and know and be more.

Read it all at The Matinee.

Upcoming Showings of "The Seer: A Portrait of Wendell Berry"

The Seer will be shown in Toronto on May 4, May 5, and May 8 at the Hotdocs International Doc Festival.

It will be shown at The Montclair Film Festival in Montclair, NJ on May 7 and May 8.

Wendell Berry to be Honored, April 23

American Novelist Wendell Berry will be awarded the 2016 Sidney Lanier Prize for Southern Literature this month.  The Center for Southern Studies is set to present this prize April 23 in celebration of Berry’s contributions to Southern literature.

A prize presentation will be held April 23 at 1 p.m. in the President’s Dining Room.  There, Berry will present the audience with a reading as well as sign books.

“For several years, students who took Mercer’s First-Year Seminar classes read Mr. Berry’s poem ‘Manifesto: The Mad Farmer Liberation Front.’ In that poem, he exhorts the reader to live freely and love the world. The poem, and Mr. Berry’s life, exemplify many of the ideals that Mercer aspires to uphold, and his prolific career as a writer, poet and activist have thoroughly enriched the tradition of Southern literature,” said David A. Davis, chair of the Lanier Prize Committee and associate professor of English at Mercer.