MACON – Mercer University’s Center for Southern Studies will award the 2016 Sidney Lanier Prize for Southern Literature to Wendell Berry. The prize honors significant career contributions to Southern writing in drama, fiction or poetry. The prize presentation will take place on Saturday, April 23, 1 p.m., in the Presidents Dining Room of the University Center on the Macon campus.

“For several years, students who took Mercer’s First-Year Seminar classes read Mr. Berry’s poem ‘Manifesto: The Mad Farmer Liberation Front.’ In that poem, he exhorts the reader to live freely and love the world. The poem, and Mr. Berry’s life, exemplify many of the ideals that Mercer aspires to uphold, and his prolific career as a writer, poet and activist have thoroughly enriched the tradition of Southern literature,” said Dr. David A. Davis, chair of the Lanier Prize Committee and associate professor of English at Mercer.

Berry, 81, is an influential essayist, novelist and poet known for his environmental and social activism. The fifth-generation Kentucky native, who has lived on a 125-acre farm near Port Royal, Ky., since 1965, has published more than 40 books, including novels, short stories, poetry and essay collections.

Berry's work reflects his deep belief that literature should both grow from and respond to place. It also expresses his concerns over such issues as sustainable agriculture, small farms and environmentally damaging coal mining. His writing has influenced opinions on a wide range of subjects, from the Vietnam War to locavore cuisine.

Berry, whose previous honors include the National Humanities Medal and the Dayton Literary Peace Prize Holbrooke Distinguished Achievement Award, will be invited to receive the NBCC's honor at a ceremony in New York City on March 17.

Wendell Berry Awarded - Thanks for the Tweets 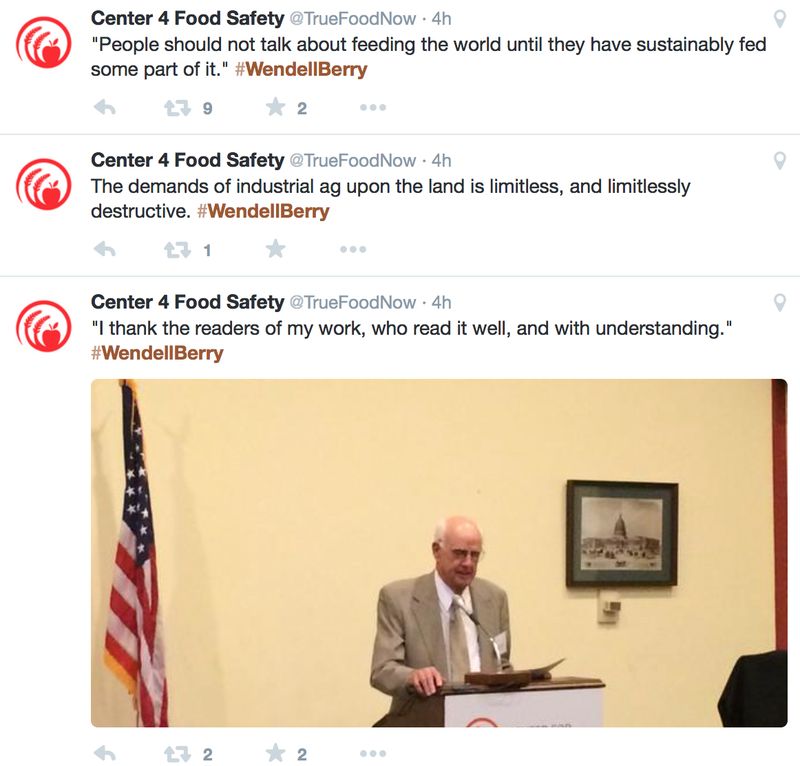 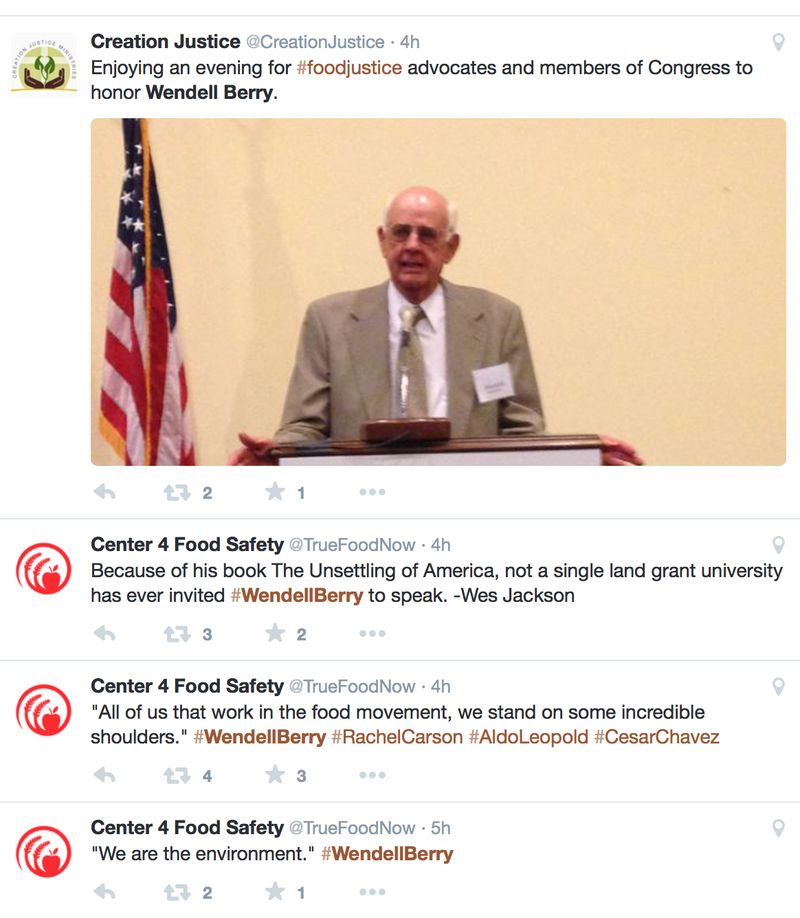 Together with our distinguished host committee, comprised of 36 Members of Congress, CFS is celebrating the lifelong achievements of Mr. Berry, September 10, 2015, at a special event on Capitol Hill. The evening will include remarks and contributions from Rep. Chellie Pingree (ME); former Rep. Dennis Kucinich (OH); and Rep. John Yarmuth (KY).

“We are honored to present this award to Wendell Berry. Mr. Berry has for decades been the conscience of American farming, exposing the destruction and devastation of industrial agribusiness, while being this country’s most important advocate for returning ‘culture’ to our agriculture,” said Andrew Kimbrell, executive director at Center for Food Safety.

[On Sunday, 21 June 2015] Kentucky poet Wendell Berry received the John Wesley Hunt Award, given to an individual for lifetime service to the preservation movement in Central Kentucky.

Wendell Berry and his wife Tanya gave the New Pioneers Trailblazer Award to their daughter, Mary Berry, all of New Castle, Ky. Mary Berry directs The Berry Center, which was created to continue the Berry family's work in culture and agriculture, going back nearly a century. The center's Berry Farm Program is based at St. Catharine College, near Springfield, where the awards ceremony was held.

Read more at The Rural Blog

On Wendell Berry at Hall of Fame Induction

At the third annual induction ceremony, Berry became the first living author to be welcomed into the Kentucky Writers Hall of Fame, a recent initiative of the Carnegie Center for Literacy and Learning, in Lexington, Ky., to honor the diverse and lasting contributions Kentucky writers have made to the literary landscape.

After turning his back on New York, Berry returned to Kentucky, to find, not a state bereft of literary talent, but a cadre of influential writers, such as James Still, Harlan Hubbard, Eugene Meatyard, and Thomas Merton, ready to embrace the Henry County native.

“My point is, in 1964, for a young writer in Kentucky, and in need of sustenance, sustenance was here,” Berry said.

Read more and view video of the complete ceremony at KET

The Carnegie Center for Literacy and Learning has posted Mr. Berry's remarks on the occasion of his induction into the Kentucky Writers Hall of Fame. It begins like this:

In the spring of 1964,Tanya and I and our children had been living in New York for two years. When my work in the city ended that spring, we loaded ourselves and our belongings into a Volkswagon beetle with a luggage rack on top and took the New Jersey Turnpike south. We were returning to Kentucky — to settle, as it turned out, permanently in my home country in Henry County. On my part, this homecoming cost a good deal of worry. Just about every one of my literary friends had told me that I was ruining myself, and I was unable entirely to disbelieve them. Why would a young writer leave a good job in New York, where all the best artistic life and talent had gathered, to go to Kentucky?

There are no uncontrolled plots” in a person’s life. I have no proof that I would not have done better to stay in New York. But I see that in retrospect my story has gained the brightening of a certain comedy. When I turned my back supposedly on the best of artistic life and talent in New York and came to Kentucky, half believing in my predicted ruin, who was here? Well, among many dear and indispensable others: James Still, Harlan Hubbard, Harry Caudill, Guy Davenport, and Gene Meatyard. All of them I came to know and, I hope, to be influenced by. In 1964 also Thomas Merton was living in Kentucky. I can’t say that I knew him as I knew the others, but I had read The Sign of Jonas when it was published in 1953. Tanya and I, by courtesy of Gene Meatyard, visited Merton twice at Gethsemani and to live here was to feel his presence and his influence. I met Harriet Arnow in, I think, 1955 when I first encountered Mr. Still, at the only writer’s conference I ever attended. Many years later I met her again, spoke to her and shook her hand, remembering from then on her eyes and the testing look she gave me. No book more confirms my native agrarianism than The Dollmaker.

Of literary or writerly life in Kentucky I have no worries. It seems lively, various, and dispersed enough to continue, which is all I can presume to ask.

My worries begin when I think of the literary life of Kentucky in the context of the state of Kentucky: a commonwealth enriched by a diversity of regions, but gravely and lastingly fragmented by divisions that are economic, social, cultural, and institutional. These divisions have given us a burdening history of abuse — of land abuse but also and inevitably of the abuse of people, for people and land cannot be destroyed or conserved except together. We all know our history of social and cultural division, from the Indian wars of the 18th Century to legal discrimination against homosexuals in the 21st. And we know how our many divisions, beginning in the lives of persons, become fixed in public and institutional life.

Continue reading at The Carnegie Center for Literacy and Learning

Posted at 07:22 AM in Appearances, Awards, Biographical Note, Other Writers | Permalink | Comments (0)

[Elizabeth] Hardwick was one of six inductees at the ceremony, which attracted a standing-room-only crowd that included several acclaimed Kentucky writers likely to be chosen for the Hall of Fame someday.

They joined 13 other writers of the past inducted during the Hall of Fame's first two years, including Robert Penn Warren, Thomas Merton, Jesse Stuart and James Still.

Most of the crowd Wednesday was there to honor Wendell Berry, the first living inductee. Berry, 80, of Henry County, has written more than 50 books of poetry, fiction and polemics. In the process, he has become an international icon in the land conservation and sustainable agriculture movements.