A Response to Some Criticism of Wendell Berry

Given the unpopular and uncompromising stands that Wendell Berry takes, it’s only natural that many readers fiercely disagree with him. Some of these disagreements are simply matters of preference. As one of his stories has it, “It is perhaps impossible for a person living unhappily with a flush toilet to imagine a person living happily without one.” Other disagreements are more substantive and not easily resolved. But any disagreement with Berry should begin with a fair reading of his work—otherwise one is simply battling a straw man. In this respect, I am afraid that even though Tamara Hill Murphy agrees with much of Berry’s vision, her recent essay in Plough Quarterly misrepresents his fiction, claiming that his stories view rural life too nostalgically, glossing over its violence and racism and brokenness.

When Murphy published an earlier version of this same argument, I suggested via Twitter (which is of course the perfect medium for discussing Wendell Berry) that she was overlooking many counterexamples where Port William does indeed suffer from its members’ anger, alcoholism, infidelities, and abuse. But the fact that she’s still making the same argument — and that Rod Dreher, another appreciative and thoughtful reader of Berry, largely agrees with her case — suggests that it may be worthwhile to point out the seamier side of Port William’s history. Because my colleague Jack Baker and I are currently editing a collection of essays on Berry’s fiction, I’ve recently been spending a lot of time in his stories, and these portray a much more multifaceted view of rural life than Murphy’s essay would lead one to believe.

When I read Berry’s poems and essays, I sense he and I are kindred spirits. I, too, care about preserving the good, true, and beautiful in a hellbent civilization. On the other hand, when I read Berry’s fiction, I begin to suspect he would not much approve of me. I read as if I were an adolescent who is constantly objecting “Yeah, but…” to the author’s often narrow view of the good life and his criticisms of anyone who wanders off the path. I can be contrarian, too, Mr. Berry.

I read about the Coulters and the Proudfoots and the Branches and perhaps his most beloved protagonist, Jayber Crow, as if I know them personally, and often I find they don’t represent themselves altogether truthfully. Maybe I feel close to them because two generations back both sides of my family lived in Port William–type villages in the center of New York State. When Mr. Crow moves to his final home on a riverbank, I feel like he’s speaking my family dialect. I know exactly the “substantial sound” of an anchor line plunking into the bottom of a boat, and the language of a single fish slurping from the surface of a still pond. I know it because, by the grace of God and kindly grandparents, I’ve spent countless childhood days on a quiet waterfront. But also, I know it because it’s embedded in my genes from my grandfather’s generation, who lived in a small village dotted with pastures and bubbling brooks.

The dissonance with Berry occurs when I consider other family tales buried under the agrarian beauty. These are stories of shattered relationships, addiction, job loss, abandonment, mental illness, and unspoken violations that seem to separate my kinfolk from the clans in Port William. In Berry’s fictional village, readers occasionally witness felonies, infidelity, drunken brawls, and tragic deaths, but all of them seem to be told in a dusky, warming light.

Read the whole article by Tamara Hill Murphy (no relation) at Plough Quarterly.

Read Rod Dreher's reflections on "What Wendell Berry Gets Wrong" at The American Conservative.

Read Tamara Hill Murphy response to all of the above in "A Few More Words on the Hole in Wendell Berry's Gospel."

Wendell Berry collection to be published in UK 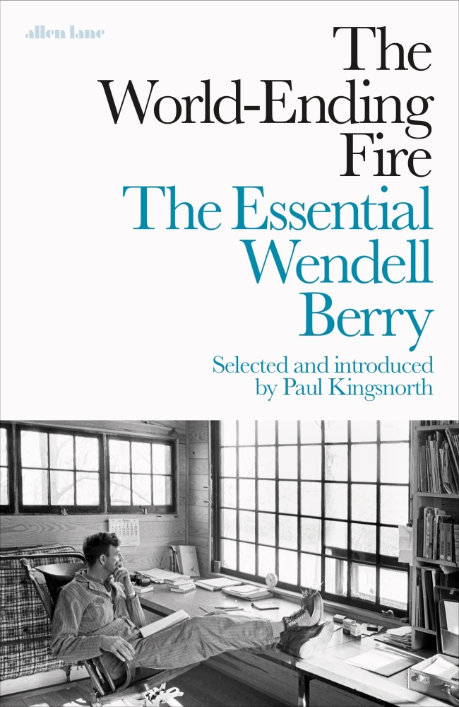 The World-Ending Fire: The Essential Wendell Berry will be published by Penguin (Allen Lane imprint) in England near the end of January, 2017.

'Wendell Berry is the most important writer and thinker that you have (probably) never heard of. He is an American sage' -James Rebanks, author of The Shepherd's Life

Wendell Berry is 'something of an anachronism'. He began his life as the old times and the last of the old-time people were dying out, and continues to this day in the old ways: a team of work horses and a pencil are his preferred working tools. The writings gathered in The World-Ending Fire are the unique product of a life spent farming the fields of rural Kentucky with mules and horses, and of the rich, intimate knowledge of the land cultivated by this work. These are essays written in defiance of the false call to progress, and in defence of the local landscapes that provide our cultural heritage, our history, our home.

In a time when our relationship to the natural world is ruled by the violence and greed of unbridled consumerism, Wendell Berry speaks out to defend the land we live on. With grace and conviction, he shows that we simply cannot afford to succumb to the mass-produced madness that drives our global economy. The natural world will not withstand it.

Yet he also shares with us a vision of consolation and of hope. We may be locked in an uneven struggle, but we can and must begin to treat our land, our neighbours, and ourselves with respect and care. We must, as Berry urges, abandon arrogance and stand in awe.

The Berry Farming Program and the Closure of St. Catharine College

Since June, I have held a heavy heart. I have also been angry, indignant, disoriented, and harried. This stands in sharp contrast to my springtime rhapsodizing, in an essay so long it had to be published in two parts, about the Berry Farming Program’s beautiful and fitting place at St. Catharine College. I wrote about the last four years my colleagues at The Berry Center and I spent establishing an experiential, transdisciplinary sustainable agriculture and agrarian studies program modeled on the lifework of farmer and writer Wendell Berry. I sung the praises of students who accepted the idea of a “major in homecoming,” that is, a course of study that would help them “return home, or go some other place, and dig in,” as our friend and supporter Wes Jackson put it.1 I waxed poetic about the radical Dominican Sisters of Peace, who founded the college and provided a touchstone model for how to institutionalize ecological and cultural stewardship.

Less than three months after penning that tribute, I sat with fellow faculty and staff in a small auditorium and listened to the president of our board of trustees tell us that the college would close by the end of summer. July 31 marked the end of almost two centuries of the Dominican Sisters’ community-based education in Washington County, Kentucky. The announcement came just weeks after six remarkable Berry Farming Program (BFP) students graduated with degrees in farming and ecological agrarianism. The rest of our students were left homeless for the fall semester, and nearly 120 faculty and staff scrambled to file unemployment while searching for last-minute hires. The closure created a social and physical vacuum for the community as the classrooms, library, dorms, and offices sit empty in the midst of cattle and sheep pastures while a national bank’s receiver tallies the assets (including, I might bitterly add, the BFP’s brand new walk-behind tractor and implements).

Read the complete article by Leah Bayens at The Whole Horse Project.