More on "The Seer: A Portrait of Wendell Berry"

The film isn’t preachy, it’s showing you that there are people willing to do what is manageable, and what is best for the land and their families.  They describe the desire for farming coming from the passion of successive generations.  There are a lot of threats to this way of life, some unavoidable without a change in our culture.  But if anyone can persuade us, Wendell Berry might be the one.   THE SEER is a thoughtful documentary, told with the same directness as Berry’s writing, with enough hope that you want to see and know and be more.

Read it all at The Matinee.

"Mercer University’s Center for Southern Studies awarded the 2016 Sidney Lanier Prize for Southern Literature to Wendell Berry on April 23 in the Presidents Dining Room inside the University Center. The prize honors significant career contributions to Southern writing in drama, fiction or poetry."

NPR on "The Seer: A Portrait of Wendell Berry"

Wendell Berry's condemnation of modern farming has brought him back into the public eye in recent years. He despises how big farming has become, and how technology-driven.

Dunn's film goes deeply into the business of farming. She speaks with migrant farm workers and big-time farmers, deeply in debt. "Ten years ago I would have never dreamed it would cost what it does to put a crop out now," says one farmer, with a haunted look in his eyes. "It's just crazy what it costs. And sometimes is gets a little hard to sleep at night. Toward the end of the year, all the crops are in the ground, all the money's spent, and we just need a good crop to pay the banks back."

Dunn replays video of a speech that Wendell Berry gave in 1974. Already at that point, he was arguing that when big farms grow and small ones disappear, communities are destroyed, along with the values that sustain those communities — values like loyalty, neighborliness, kindness.

"I don't think that you can love those old values, and love what has come to be American agriculture at the same time," he told his audience.

Upcoming Showings of "The Seer: A Portrait of Wendell Berry"

The Seer will be shown in Toronto on May 4, May 5, and May 8 at the Hotdocs International Doc Festival.

It will be shown at The Montclair Film Festival in Montclair, NJ on May 7 and May 8.

Award Given to Wendell Berry Interview

On November 8, 2014, Regent alumnus Chad Wriglesworth sat down with prolific author Wendell Berry to discuss work, sustainability, and eternity. The conversation, which took place at the South Atlantic Modern Language Association Conference in Atlanta, Georgia, was first published in the Spring 2015 edition of CRUX.

We Are Still Near the Beginning: A Conversation with Wendell Berry has been awarded First Place in the Interview Article category of the Evangelical Press Association's 2016 Higher Goals Awards. Please join us in congratulating Wendell Berry, Chad Wriglesworth, and the editorial staff of CRUX for this significant achievement.

Wendell Berry to be Honored, April 23

American Novelist Wendell Berry will be awarded the 2016 Sidney Lanier Prize for Southern Literature this month.  The Center for Southern Studies is set to present this prize April 23 in celebration of Berry’s contributions to Southern literature.

A prize presentation will be held April 23 at 1 p.m. in the President’s Dining Room.  There, Berry will present the audience with a reading as well as sign books.

“For several years, students who took Mercer’s First-Year Seminar classes read Mr. Berry’s poem ‘Manifesto: The Mad Farmer Liberation Front.’ In that poem, he exhorts the reader to live freely and love the world. The poem, and Mr. Berry’s life, exemplify many of the ideals that Mercer aspires to uphold, and his prolific career as a writer, poet and activist have thoroughly enriched the tradition of Southern literature,” said David A. Davis, chair of the Lanier Prize Committee and associate professor of English at Mercer.

Another Review of "The Seer: A Portrait of Wendell Berry"

Austin-based Cinematographer Lee Daniel – perhaps best known for his collaborations with director Richard Linklater on films like Dazed and Confused, Before Sunrise and Boyhood – just won a Special Jury Recognition for Cinematography at the 2016 SXSW Festival for his work on The Seer, and it is well deserved. A movie about the destruction of America’s fading heartland and traditional farming practices, The Seer owes much of its raw power to Daniel’s stunning shots of Kentucky’s rural landscapes and portraits of its worn-out denizens. Co-directors Laura Dunn and Jef Sewell (director and producer on The Unforeseen, which Daniel also shot) do a fine job assembling footage for this elegiac cri de cœur, but the movie really belongs to Daniel’s images.

Read it all at Hammer to Nail. 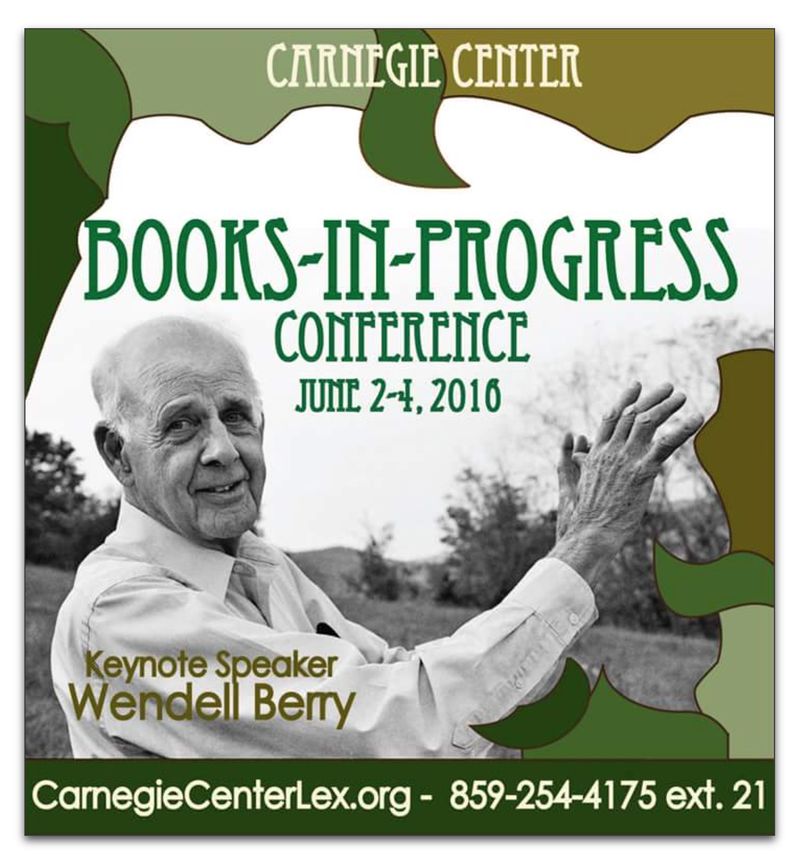 See more information at The Carnegie Center for Literacy and Learning, Lexington, KY.

"The Seer: A Portrait of Wendell Berry" in Bozeman, MT

The new documentary, “The Seer: A Portrait of Wendell Berry,” begins with a stunning whirlwind view of modern life, then meanders down a leaf strewn path through the forest to a place seen as the boondocks – the sticks, nowhere – and proceeds to both tell and show us the beauty of life there. Throughout the journey, our guide is the deep, rich voice of the author, sharing his works and his wisdom on the transformation of this country’s agrarian areas during the rise of industrial agriculture in a process he once referred to as “the unsettling of America.” “The Seer” is an ode to the small town, the small farm and the countryside – a powerful call for reconnecting with the land and community.

On the Wendell Berry Farming Program at St. Catharine College