Director Laura Dunn and The Seer production team have begun a Kickstarter campaign to help bring their film about Wendell Berry and his work to completion. Please consider helping out by visiting HERE,

This photo of the cover of The Unsettling of America published in Korea comes via The Berry Center. Visually striking. 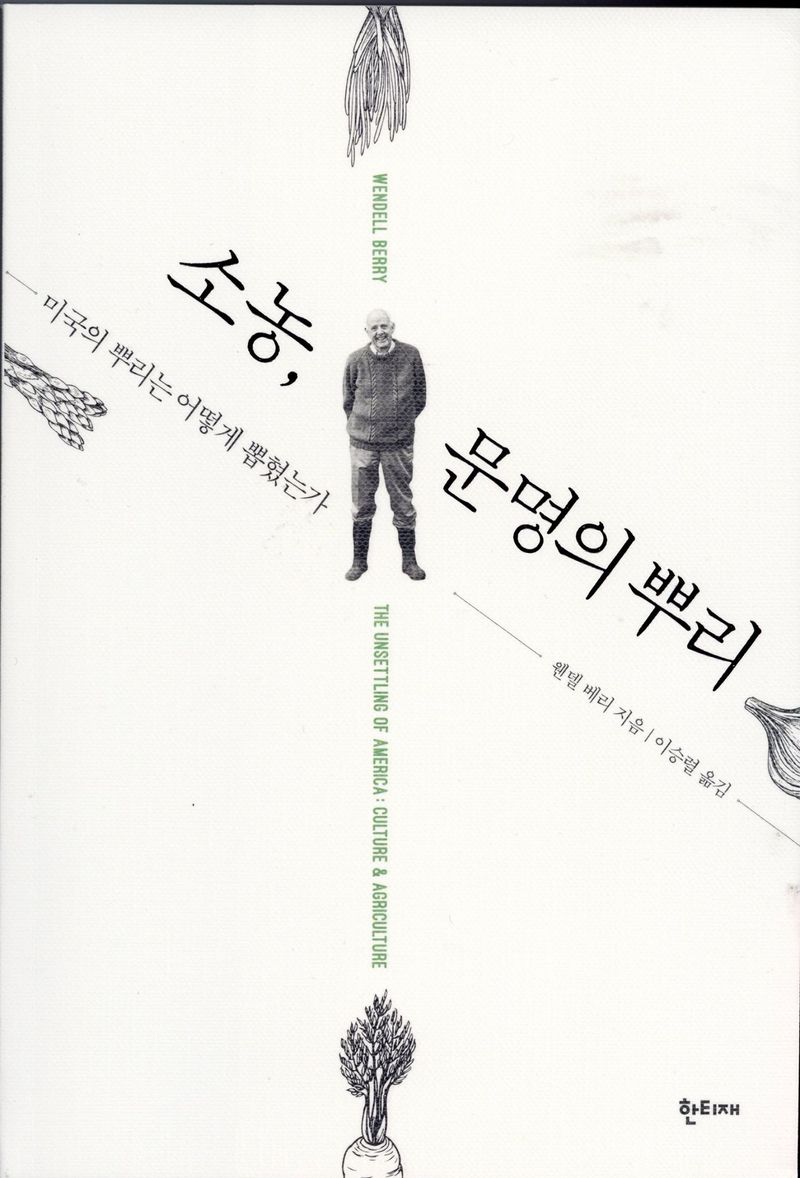 Dreher on Wendell Berry, The Seer, and Donald Trump

Rod Dreher has posted "A Letter from Trump's America" in which, after reading said letter and viewing an advance copy of an unnamed film (what a reader may presume is Laura Dunn's The Seer), he writes:

This is Wendell Berry 101. The film shows us older Kentucky farmers talking about what they and their communities have lost — dying towns, for example — and how the system — big agribusiness, the banks, etc. — is stacked against them.

Toward the end of the film, a bizarre thought occurred to me: Donald J. Trump, who is probably the least Berryan figure in the country, is the only one of the GOP candidates who is talking to and for Republican voters who are living in the maelstrom. Don’t misunderstand me: Trump is absolutely not the standard-bearer of Berryan politics! (And that’s the understatement of the year.) But how incredibly weird is it that in 2016, the candidate that speaks most to the condition of those conservatives displaced by the economics and the wars of the Establishment is the loudmouth New York billionaire? Whether or not he has solutions to their condition is a secondary issue. He’s the one who sees, or who at least intuits, that something very wrong has happened, and that the neoliberal order built by the Republican and Democratic Establishment has broken some fundamental things.

Read the complete article at The American Conservative

Wendell Berry Cited on The Use of Symbols

“The problem with wars is that they don’t end,” Kentucky writer Wendell Berry told the American Association of State and Local History conference in Louisville in September (2015). “We’ve still got the Civil War.”

Berry and state historian James Klotter of Georgetown College addressed the gathering as part of a discussion about the relevance of history. The Charleston shootings and the ensuing debates over Confederate flags and statues became a focal point of their conversation.

“I understand about the Confederate flag and the problem it raises,” says Berry. “I don’t think that flag is a symbol so much as it is a finger… I think after the south was defeated in the Civil War, all it had left was spite and it understands how to use symbols in a spiteful way.”

Perspective is another crucial element, adds Klotter. He contends without a knowledge of history, people operate in a vacuum without a sense of where they’ve been or how they got where they are today. And from that grounding, Klotter says history gives individuals a new sense of both identity and objectivity.

Berry says that anyone is capable of falling into indifference. He cautions that reducing either side – liberal or conservative, Union or Confederate, black or white – to its stereotypes involves a great risk.

Posted at 10:43 AM in Appearances, Cited, Current Affairs | Permalink | Comments (0)

The 2015 Annual Meeting Plenary [of the American Association for State and Local History] was a discussion with author Wendell Berry and Kentucky State Historian Dr. James C. Klotter, moderated by KET personality Renee Shaw. Berry and Klotter discussed the importance of studying the past as a way to prepare for the future. Berry is an author and Kentucky treasure, famous for his writings on nature and ecology. Klotter received his Ph.D. in history from the University of Kentucky. He is the author, co-author, or editor of almost twenty prize-winning books, including the standard works on Kentucky used at the elementary, secondary, and college level. Shaw is the host of Connections with Renee Shaw on Kentucky Educational Television.

Posted at 10:40 AM in Appearances, Current Affairs, Other Writers | Permalink | Comments (0)

Wendell Berry, the 81-year-old award-winning poet, fiction writer and essayist, has continued throughout his life to care for the Kentucky farm that generations of his family have tended. Seeking to pass on their farming legacy to a new generation, Berry and his family have formed an alliance with Saint Catherine College, a small Catholic liberal arts college run by the Dominican Sisters of Peace. Correspondent Judy Valente talks with Mary Berry, Wendell Berry’s daughter, and with nuns, students, and faculty members at the college about the lessons and values that spring from having a spiritual kinship with the land.

In a re-broadcast of an interview with Wendell Berry (from about a year ago) Wendell Berry speaks about farm communities of the past: "So in those days you didn't hear people putting 'just' before their occupation. People weren't describing themselves as 'just' a farmer,' and farm wives didn't describe themselves as 'just' a housewife because they, too, practiced an intricate art."

Listen to it all (again, perhaps) at Rootstock Radio.

MACON – Mercer University’s Center for Southern Studies will award the 2016 Sidney Lanier Prize for Southern Literature to Wendell Berry. The prize honors significant career contributions to Southern writing in drama, fiction or poetry. The prize presentation will take place on Saturday, April 23, 1 p.m., in the Presidents Dining Room of the University Center on the Macon campus.

“For several years, students who took Mercer’s First-Year Seminar classes read Mr. Berry’s poem ‘Manifesto: The Mad Farmer Liberation Front.’ In that poem, he exhorts the reader to live freely and love the world. The poem, and Mr. Berry’s life, exemplify many of the ideals that Mercer aspires to uphold, and his prolific career as a writer, poet and activist have thoroughly enriched the tradition of Southern literature,” said Dr. David A. Davis, chair of the Lanier Prize Committee and associate professor of English at Mercer.