A 2008 letter from Wendell Berry

After returning home (following a "craftsmanship" tour of the Jack Daniels whiskey distillery), the students organized fifteen key questions that seemed the most important to them from all of our readings. I mailed them to Mr. Berry and he kindly responded with the letter posted to the right, along with typewritten responses to each question. I'm providing them for you here:

1. How much, if any, of Andy Catlett did you base upon your own life?
Andy Catlett is derived fairly directly from things I learned and that I remember from this part of the country at the time of my childhood. At the same time, it is very much a work of fiction. It had to be an imagined work simply because my memories are not complete enough to give me a whole story. And so Andy's bus ride, for example, is entirely imaginary. So are several of the characters and a good many of the events.

2. Where did industry go wrong, and why?
One of the large errors of industrialism is that it treats the ecological support system as "free." That is, it does not deduct ecological costs. To that I would add the tendency of industrialists to work on a scale so large that damages to ecosystems and human communities are inevitable.

Read more of this letter at Eighth Day Institute

Posted at 09:53 AM in Agriculture, Economy, Interviews | Permalink | Comments (0)

Blogger Erin Doom has written to Wendell Berry to ask three questions: "How would you define a sacrament?", "How is the world a gift?" and "If you had three minutes to say anything you wanted about our symposium theme [Soil and Sacrament: The World as Gift”], what would you say?"

What Kentucky writer-farmer-thinker Wendell Berry thinks about agriculture is usually straightforward and clearly identified as such. What he thinks about culture sometimes has to be gleaned from his opinions on other topics. One topic of American culture that he takes on often in an oblique way is education, and his short story “Pray without Ceasing” (Fid, 1992) is a prime example. Many relevant themes of education play out in the story and how Berry tells it, but formal education is never mentioned—the closest we get is the appearance of Jack Beechum’s grade school teacher. Yet Berry himself cited this story as a way to gain insight into how education could better serve our world, and the story connects with his deepest hope for education. The story raises important questions about the relationship between formal education and violence, something Berry has called the “great moral issue of our time” (WI, 2005, p. 145), and the story suggests how education could do better.

To read Jane Schreck's entire essay (which opens as a pdf file), visit In Factis Pax

This will be the first of a series of activities this weekend to reflect on and commemorate the achievements in our field over the last 25 years. The sustainable food movement has come a long way in the past 25 years through the work of you, me and tens of thousands of others working at all levels — farm, community, state, regional and national. With this 25 Years in the Field event, we’ll hear from a sample of those who, through a diversity of avenues, have a long history of contributing to the growth in sustainable and organic agriculture and local foods. We are honored to have Wendell Berry, author and farmer (KY); Alex Hitt, Peregrine Farm (NC); Janie Simms Hipp, Univ. of Arkansas School of Law (AR); and Andrew Williams, The United Christian Community Association (AL) sharing their unique perspectives with us. We’ll learn what keeps them laughing, motivated and inspired.

Door Prizes! To add to the celebratory mood, we’ll give away 25 exciting door prizes over the weekend, the first few will be given out during this event! Must be present to win.

Wendell Berry, Joel Salatin, Laura Lengnick, Pam Dawling and other presenters TBA will be on hand to sell and autograph their books for you immediately following the 25 Years in the Field event.

Berry, 81, is an influential essayist, novelist and poet known for his environmental and social activism. The fifth-generation Kentucky native, who has lived on a 125-acre farm near Port Royal, Ky., since 1965, has published more than 40 books, including novels, short stories, poetry and essay collections.

Berry's work reflects his deep belief that literature should both grow from and respond to place. It also expresses his concerns over such issues as sustainable agriculture, small farms and environmentally damaging coal mining. His writing has influenced opinions on a wide range of subjects, from the Vietnam War to locavore cuisine.

Berry, whose previous honors include the National Humanities Medal and the Dayton Literary Peace Prize Holbrooke Distinguished Achievement Award, will be invited to receive the NBCC's honor at a ceremony in New York City on March 17.

The excellent Larkspur Press edition of Wendell Berry's Sabbaths 2013 has received some very positive notice in the Chicago Tribune:

There are rare few times in the unfolding of our quotidian lives when we hold something in our hands and know, right away, that it's sacred. To hold "Sabbaths 2013," a hand-bound volume of Kentucky poet Wendell Berry's poems in handset type with wood engravings by Wesley Bates, is to behold the sacred.

Read more at The Chicago Tribune

That Poem by Wendell Berry

"When despair for the world ..." launches what is almost certainly the most popular poem (on the internet) by Wendell Berry. I tested this out back in 2009. A quick re-check today produces "about 82,900 results" for "Peace" and "about 18,700 results" for "Manifesto." So it looks like "The Peace of Wild Things" holds an unassailable dominion.

What brought this to mind was a tweet I just found of an Instagram illustration of "The Peace of Wild Things" by Raquel Martinez. I think it is particularly well-done as a triptych. 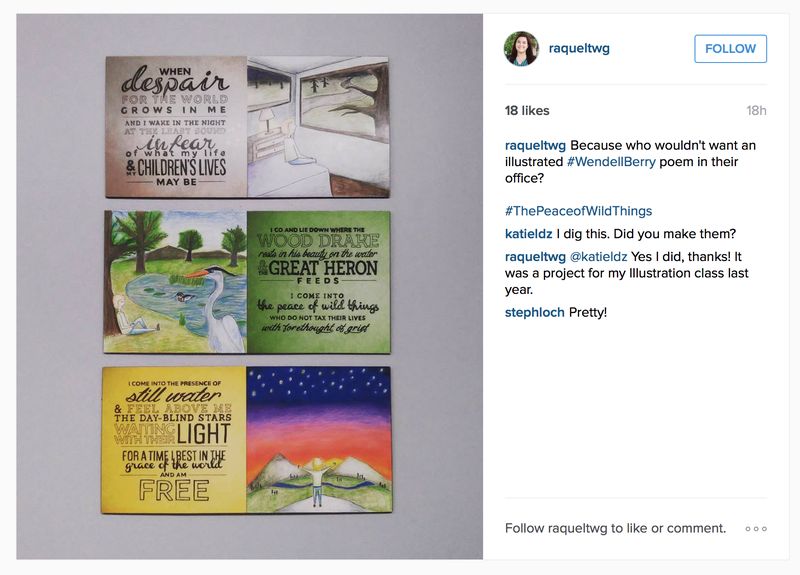 If Wendell Berry were editing the aphorism, “Hell is other people” it would become, “Hell is busy people in search of something more, or something else… Heaven is a good friend.” On this first day of 2016 we do well to consider these hells and heavens that we inhabit, that we have made of the world. “Hell is in business here all the time,” Berry says, “Heaven too, or we couldn’t stand it.”

I was in the audience the evening the video below was taken. After the reading Berry signed my copy of Leavings. He asked me where I was from, and when I told him I was from Salina, Kansas he nearly jumped out of his skin. We spent a few moments talking about Wes Jackson, the Land Institute, and how beautiful it is there.