In February 2015, Counterpoint will publish a new collection of essays by Mr. Berry entitled Our Only World: Eleven Essays.

The planet’s environmental problems respect no national boundaries. From soil erosion and population displacement to climate change and failed energy policies, American governing classes are paid by corporations to pretend that debate is the only democratic necessity and that solutions are capable of withstanding endless delay. Late Capitalism goes about its business of finishing off the planet. And we citizens are left with a shell of what was once proudly described as The American Dream.

In this new collection of eleven essays, Berry confronts head-on the necessity of clear thinking and direct action. Never one to ignore the present challenge, he understands that only clearly stated questions support the understanding their answers require. For more than fifty years we’ve had no better spokesman and no more eloquent advocate for the planet, for our families, and for the future of our children and ourselves.

(From the description found at Amazon. Please pardon the link to Amazon. It is just about the only online place for information about this title. A gentle nudge to Counterpoint: you could do some better to promote Mr. Berry's upcoming work.) 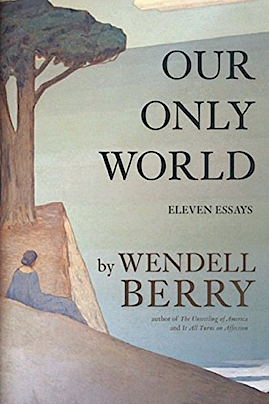 Wendell Berry’s mind is preoccupied with four dead sheep. I join the 80-year-old food movement sage for a drink and a visit in the kitchen of his neat white house on the top of the hill in Henry County. The talk meanders, picks up steam, and tapers off until the hum of the refrigerator fills the air, but the conversation always circles back to those missing animals.

Berry has four fewer sheep, but there were only two carcasses. The others disappeared without a trace. It’s coyotes, according to a trapper who knows the beasts and how to get rid of them. Berry has never heard of coyotes doing such a thing — not the stealing of sheep, for which they have an established reputation, but for doing such a clean job of it. No telltale chunks of hide or dried blood. I can tell it rattles around in his thoughts even as we trade stories of hunters being hunted, my home state of Montana, and women who tell dirty jokes.

Berry’s mind is one of the most famous and respected in environmentalism. The farming poet has been writing since the ’60s, and has more than 50 books to his name. His timeless tomes show a deep love of nature and rich understanding of the power of community. Described as the “modern-day Thoreau,” Berry holds up the simple, good things in the world while decrying the forces of greed and globalization that sully them. The man knows how to pack a punch in just a few words: “There are no unsacred places; there are only sacred places and desecrated places.’’

Posted at 08:06 AM in Biographical Note, Discussed | Permalink | Comments (0)

A selection of poems by Wendell Berry and fully illustrated by Tom Pohrt is now available. The book is aimed at a young audience, but older readers will find quite a few favorite poems—and perhaps a few new discoveries.

From the front flap: "Over the past several years a dialogue has evolved in which the poet has come to advise the illustrator on the natural history of the animals and plants seen so intimately in the poems." 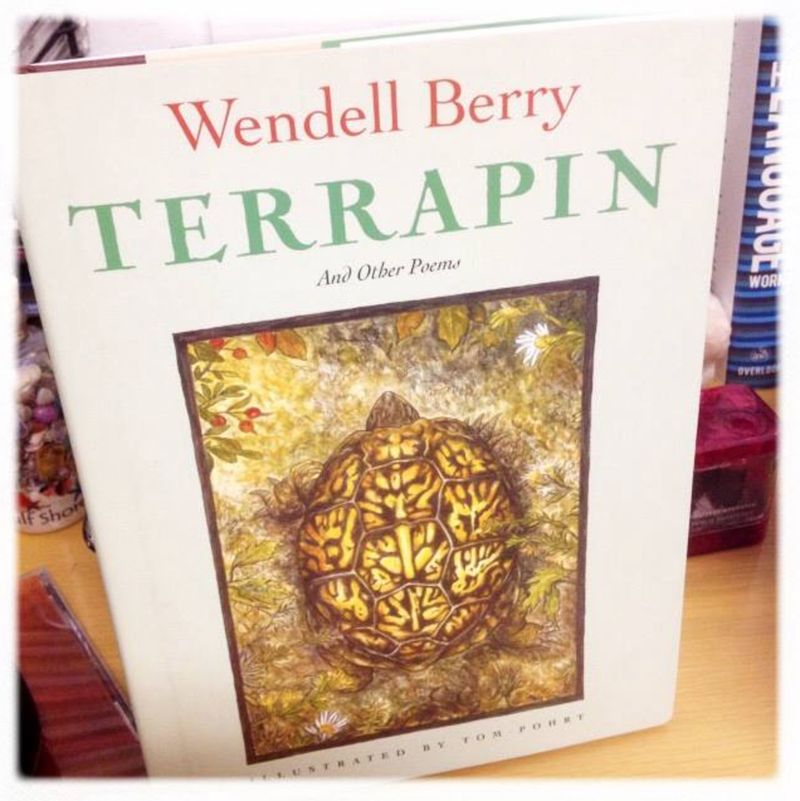 Thirteen times, however, Berry explicitly uses the word ‘but’ in very close conjunction with the personal pronoun.  These could be considered “But-I” constructions.  Some examples:

That sense of the past is probably one reason for the melancholy that I feel.  But I know that there are other reasons.

And now, here at my camping place, I have stopped altogether.  But my mind is still keyed to seventy miles an hour.

Perhaps the most difficult labor for my species is to accept its limits, its weakness and ignorance.  But here I am.

And so I have come here to enact – not because I want to but because, once here, I cannot help it – the loneliness and the humbleness of my kind.

Notably, most of these thirteen instances even have sentences that begin with ‘but’.  (There are two other instances that fall into this same “but-I” category but use ‘though’ as their contrast word.)

Berry uses “But-I” constructions to introduce a questioning, a lack of assurance, into the essay as a whole.  It seems Berry is puzzling out the answer as he writes.  Though he may be on sure footing with the calls of the woodpecker, he is communicating that he is less sure about the broader questions of wilderness in the context of human culture.  In the above examples, note the use of ‘probably’ and ‘perhaps’ and ‘I cannot help it.’  These words note a less clear-cut view of reality and they appear in nearly every “But-I” circumstance.  The use of “But-I,” therefore, especially when ‘but’ originates a sentence, signals an entry into Berry’s mind’s eye, where the answers are less sure.

On Reading Wendell Berry's "Life Is a Miracle"

Berry is either a naturalist poet or a poetic naturalist. He uses reason without ignoring emotion and in fact embraces emotion as part of the overall compass we use to navigate through life. I rarely hear this kind of respect towards listeners or readers from environmentalists or scientific minds. Berry is organic. He has a well rounded completeness to him that I don’t observe in many people engaged in the large public discourses over humanity, Earth, the individual, and freedom and responsibility.

Wendell Berry and Many Others to Speak at Slow Money 2014

November 10-11 will find Slow Money gathering in Louisville. Wendell Berry will be among the many speakers at this event.

“…all our problems tend to gather under two questions about knowledge: Having the ability and desire to know, how and what should we learn? And, having learned, how and for what should we use what we know?”

Wendell Berry, likely America’s greatest living writer and certainly its most compelling essayist, succinctly captures the challenge of education in this excerpt on an essay from a (mostly) unrelated topic from “People, Land, and Community.”

But in the quote, Berry (whose ideas we’ve used to reflect on learning before, including this Inside-Out School Learning Model) has given us the ingredients for any authentic system of learning.

On Collaborating with Wendell Berry

Where do poetry and music intersect? Composer Andrew Maxfield recently spent several years writing a musical celebration of Wendell Berry's poetry, which culminated in a collaboration with Mr. Berry. In an intimate workshop setting, Andrew will describe what he learned about poetry, reveal some of the composer's tools and approaches, and lead participants in a musical exploration of Wendell Berry's poetry. The evening will include live performances of music that has now been heard across the country in premiere performances and on public radio.

On the Use of a Wendell Berry Title

“The Country of Marriage,” as Franck writes, is part of the title of Esolen’s last chapter, the capstone of his book which is, entirely, an argument against gay marriage.

Of course, “The Country of Marriage” is also the title of a book of poems by the deeply Christian Wendell Berry. And Berry, of course, made waves last year by vehemently standing up for gay marriage. As Fred Clark observed at the time, no one should have been surprised by that—Berry’s support of gay marriage is “wholly of a piece with everything else the man has written and argued and defended.” Catholic writer Jerry Salyer argued something similar a few weeks ago.

For the record, I love the image, the idea of marriage as a country or a landscape. But if you’re going to use that idea, you need to put it into Berry’s much larger understanding of what a landscape is. You need to look at the way Berry understands nature, which is very different from what the way Esolen sees it.

via Letters to the Catholic Right

This past weekend, 30 Hillsdale students had the opportunity to hear celebrated novelist and activist Wendell Berry speak at the fourth annual Front Porch Republic conference in Louisville, Kentucky.

The conference is held every year at various locations across America to “examine ways to promote a more comprehensive localist vision,” according to the Front Porch Republic website.

“[Berry] doesn’t give that many public appearances,” said senior David Roach, who attended the conference. “So it was really interesting to hear him speak.”

“It was great to hear various responses to our very Hillsdalean questions concerning the problem of modernity,” junior Aaron Schreck said.

via The Hillsdale Collegian