Letters of Wendell Berry and Gary Snyder to be published

In 1969 Gary Snyder returned from a long residence in Japan to the Sierra foothills, where he intended to build a house and settle with his wife and sons. He had just published his first book of essays, Earth House Hold. A few years before, Wendell Berry left New York City for farmland in Port Royal, Kentucky, where he built a small studio and lived with his wife. Berry had just published Long-Legged House. These two founding members of the counterculture had yet to meet, but they knew each other’s work and soon began a correspondence. Neither man could have imagined the impact their work would have on American political and literary culture, nor the impact they would have on one another.

They exchanged more than 240 letters from 1973 to 2013, bringing out the best in each other as they grappled with faith and reason, discussed home and family, worried over the disintegration of community and commonwealth, and shared the details of the lives they’d chosen with their wives and children. None can be unaffected by the complexity of their relationship, the subtlety of their arguments, and the grace of their friendship. This is a book for the ages.

A recent edit on the Wikipedia page for “Wendell Berry” has got me wondering about a tug-of-war over precisely how Mr. Berry’s religious affiliation is described.

Here is an image of the present situation (i.e. before I make my own changes). Words in blue indicate the most recent changes.

Within the context of his complete statement (given in the footnote), we see that WB is responding to his interviewer’s assertion that he is a Baptist. The user who made this edit (“Goose friend” hereafter GF) seems most interested in foregrounding Mr. Berry’s Christianity as such. He seems to see a problem with merely accepting WB’s statement and its context as sufficient grounds for asserting Mr. Berry’s personal commitment to Christianity. And he may be correct, in that WB does not pronounce a Credo here. But the passage as originally stated (in yellow), conforms to an actual statement by Mr. Berry. GF, as I read his edit, is distorting the original—perhaps out of a need to pin Mr. Berry down on the Christian map. In addition, GF creates a new problem with his edit in that we must now wrestle with the notion of a Christian who doesn’t take the Gospel seriously.

Of the many Christian readers of WB’s work (of which I am one), there seem to be some (not me) who are not satisfied with the terms by which WB relates himself to Christianity. They seek some absolute, iron-clad declaration by Mr. Berry that he does, in fact, accept and adhere to Christian dogma (perhaps as we find it in the Apostle’s Creed). One guesses that if such a declaratory moment cannot be found, these readers would have to abandon their interest in WB’s work, since his faith has not been proven to be as pure as they would like it to be.

It is hardly too much to say that most Christian organizations are as happily indifferent to the ecological, cultural, and religious implications of industrial economics as are most industrial organizations. (94)

His “most” here suggests that the exceptions are few.

Glynn Young has recently written at his blog, Faith, Fiction, Friends, that “Berry is a writer who happens to be a Christian, and his faith is not an obstacle for readers who don’t share it.” It is kind of ironic that some of those who do share that faith find any number of obstacles and are less generous than they might be in not allowing Mr. Berry’s self-description as “a person who takes the Gospel seriously” to stand.

Posted at 10:15 AM in Biographical Note, Discussed, Religion | Permalink | Comments (2)

From a fine, brief appreciation of Mr. Berry's work:

First, Berry is a fine writer and a fine poet. His work embraces a considerable body of novels, short stories, poetry and essays.
Second, Berry is a writer who happens to be a Christian, and his faith is not an obstacle for readers and critics who don’t share it.
Third, his writing is all of a piece, a coherent worldview and way of understanding the world.

At the Academy of American Religion's annual meeting in Baltimore last November, Mr. Berry and Norman Wirzba had a public conversation. On this occasion Mr. Berry received the Martin E. Marty Public Understanding of Religion Award. Please go HERE for the audio.

Posted at 06:23 AM in Appearances, Events, Interviews | Permalink | Comments (0)

Wendell Berry poems to be sung at St. Ambrose University

Three poems by Wendell Berry will be sung by members of the University Chorale to music composed by William Campbell, PhD, associate professor and Music Department chair, in a concert intended to celebrate the 2014 St. Ambrose University project theme of Sustainability.

SAU's Chamber Singers and the Bee Sharp men's vocal ensemble also will perform in the concert that will begin at 3 p.m. Sunday, March 2, in the Galvin Fine Arts Center.

"Wendell Berry is well known for his writings and poems that express the relationship between humans and nature," Campbell said. "My compositions are settings of three of his Sabbath poems from A Timbered Choir: The Clearing Rests in Song and Shade, I Go Among the Trees and Sit Still and All the Earth Shall Sing.

This fragmented view of philanthropy risks compromising the values we claim to stand for. Wilson would have us believe that it is perfectly consistent to make wealth one’s chief aim during the first half of life, only to change that aim to philanthropy in the second half of life. But the values inherent in these two pursuits are disjointed, if not totally opposed to one another. Making wealth our highest priority (or at least a higher priority than giving) will inevitably cause us to act in ways that are antithetical to “the love of humanity”.

Wendell Berry knows this viscerally. In his 2012 Jefferson Lecture, Berry recounts the story of his grandfather, a small Kentucky farmer who spent his working life at the mercy of the American Tobacco Company (ATC), which was founded by James B. Duke. The ATC, as Berry put it, “had eliminated all competitors and thus was able to reduce as it pleased the prices it paid to farmers.” This made life very hard for the Berry family and countless other tobacco farmers across the U.S.

via The Good Men Project

An Opera based on Wendell Berry's "Payne Hollow"

Bard College Conservatory of Music will be presenting Payne Hollow, an opera by Shawn Jaeger with a libretto from Wendell Berry's Sonata at Payne Hollow. Two performances are scheduled: Friday, March 14 and Sunday, March 16. The opera will be a world premiere in conjunction with a performance of Benjamin Britten's The Turn of the Screw. Go HERE for more information.

I stumbled onto this information via this delightful Twitter conversation: 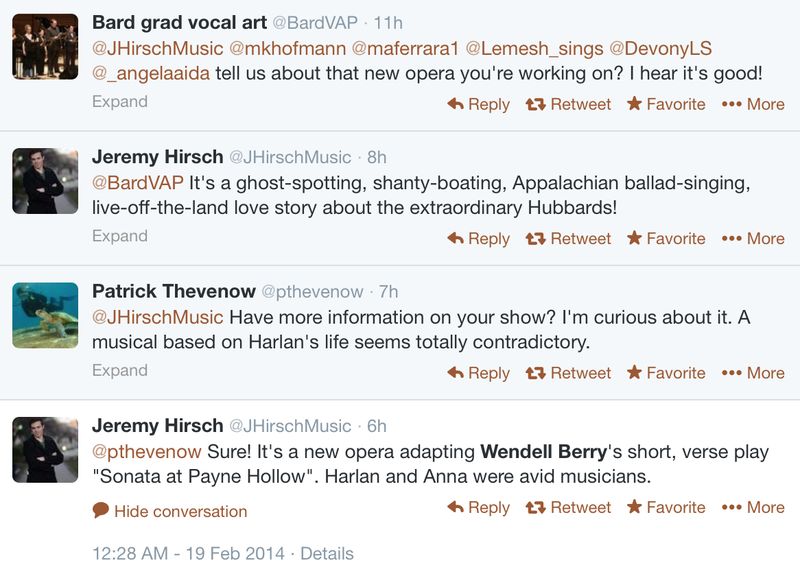 Nick explained to the audience what a promising literary career the young Wendell Berry was enjoying.  After graduating from UK, he had been invited to attend Stanford's creative writing program.  Upon completing his first novel, Berry and his family lived in Europe courtesy of a Guggenheim Fellowship.  A year later, in 1962, Berry accepted a teaching position at NYU.  Here was a man who truly had the world before him, Offerman explained, yet Berry surprised everyone when he announced he was leaving New York to return to his native Kentucky. He would move back to his own people in Henry County, Kentucky. And from the small town of Port Royal (population ±79)  Berry would go on to write dozens of enduring short stories, novels, poems and works of non-fiction.  And love his wife. And raise his children. And farm his land. And be a member of his true community.

I don't think Nick's rendition of Berry's arc was lost on this audience.  Los Angeles, like New York, is a city where people move to "make it."  It's not a place those in the process of "making it" would necessarily think to leave.  Yet Berry himself did something like that.  And for Berry, that has made all the difference.  But I digress.

Noted poet, essayist and novelist Wendell Berry was on hand again this year, but he said he doesn’t expect much response by Kentucky’s elected officials.

He said he’s been protesting surface mining and the effects on the land since 1964 but not much has changed.

“It has been hopeless so far,” Berry said of his decades’ long fight against strip mining. He noted the efforts by Gov. Steve Beshear and U.S. Congressman Harold “Hal” Rogers to reinvigorate the economy of eastern Kentucky – an economy that has relied for decades almost exclusively on the coal industry.

“But it is futile to try to do something for people while you let the land be destroyed beneath their feet,” Berry said.

In his speech, “It All Turns on Affection,” environmental activist and writer Wendell Berry draws attention to our turning away from the land, and by extension, each other. At his argument’s core, he posits that if we care for our land—that is, if we serve as loyal caretakers—then we ought to care what becomes of it as well. Berry means this mostly in an environmental sense—particularly as it applies to the demise of the family farm—but the sentiment can be extended to other situations. For instance, if “affection” for a place ensures that we care for that place, does a lack of affection imply that we won’t?  Though it’s clear that the mob in Duluth had little care for the lives of men, were they equally careless toward their land?  Did they fail to recognize the reputation that would linger as a result of their actions, a scourge that—for nearly a hundred years now—have left men like me staring helplessly into the water?