"Wendell Berry's Work" looks for something to read and discuss

The email discussion group known as Wendell Berry's Work is almost twelve years old. Three days ago I was pretty sure that it was on its last legs. Only two messages had been posted in the previous four months.

And then the other day, when I wrote with an offer to end the group, all kinds of interesting things began to happen.

Among those things was a widely approved suggestion that we try to discuss one or another of Mr. Berry's works. Ideas were shared and a poll was constructed. And here are the results: 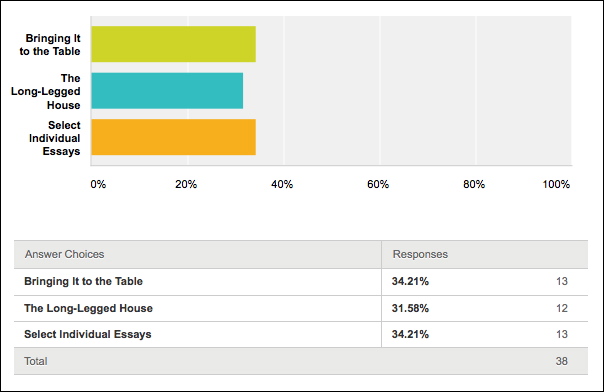 As you can see, it's a fairly indecisive result. But it offers great hope in that at least 38 members of the group have a strong desire to discuss Mr. Berry's writing.

I think one more poll is in order. And then ... we will see.