"Wendell Berry Won’t Quit Trying to Save the Mountains"

Fourteen mountain-top removal protesters — including author Wendell Berry — are in their third day of a sit-in/sleep-in at the Kentucky Governor’s Office in Frankfort. The group, known as Kentucky Rising, is demanding that Gov. Steve Beshear (D), who is up for reelection in November, end his support of mountaintop removal, a destructive form of surface mining that has buried over 2,000 miles of Appalachian streams. They also insist that he withdraw from a lawsuit he filed, in an alliance with the Kentucky Coal Association, against the Environmental Protection Agency.

Wendell Berry, a native Kentuckian and author most recently of Bringing It To the Table: On Farming and Food, was interviewed by Jeff Biggers this week on mountain-top removal coal mining and why he is protesting at the Capitol.

"Jeff Biggers | A just protest in a long struggle"

As author/farmer philosopher Wendell Berry settled his 76-year-old lanky frame onto the floor of Kentucky Gov. Steve Beshear's office this past weekend, he picked up a copy of “The Tempest.” But in joining other protesters in this extraordinary sit-in to halt reckless mountaintop removal mining — including a coal miner and inspector who dedicated 40 years of his life to the industry, a Harlan County activist whose brother was killed in a mine, a nurse who has served black lung-affected coal miners for decades and some of the country's top Appalachian labor and history scholars — Berry was not taking part in any Shakespeare spectacle.

When Prospero commands in the classic play, “We are such stuff, as dreams are made on,” Kentuckians, who have lived among the ravages of strip-mining for a century — and mountaintop removal operations since 1970 — were making it clear that they can no longer wait for the elusive dream of coalfield justice and democracy in their own homeland of central Appalachia.

"Sit-in, then sleep-in at Capitol"

FRANKFORT, Ky. — Wendell Berry slowly walked from the corridor of the empty Capitol Building into the governor’s reception room, where 13 fellow activists were scattered among the chairs and desks, eating, playing card games, and laying out pillows and coats to be used as makeshift beds.

The protesters had been in Gov. Steve Beshear’s outer office protesting for nearly 36 hours and still had two nights ahead of them. They were in good spirits, and Berry hoped to keep them that way. In his left hand was a copy of Shakespeare’s “The Tempest” and in his right were his glasses, which he put on as he told everyone he had something to share with them.

“Misery acquaints a man with strange bedfellows,” Berry read, as his face turned bright red with laughter. The room roared as they recounted their efforts to sleep 14 people in a jigsaw puzzle-pattern on the royal red carpet of the governor’s office the night before.

But it wasn’t all fun and games. The group, which had dubbed itself “Kentucky Rising,” was there for a reason.

"Chris Hedges: Fight for a World Without Coal"

The writer and philosopher Wendell Berry, armed with little more than a copy of William Shakespeare’s “The Tempest” and his conscience, has been camped out for three days with a handful of other activists in the governor’s outer office in Frankfort, Ky. Berry, who is 76 and the author of a number of important books including the “Unsettling of America” and “Life Is a Miracle,” has been sleeping on the floor of Gov. Steve Beshear’s reception area since Friday night with 13 others to protest the continued blasting of mountaintops in eastern Kentucky and the poisoning of watersheds, soil and air by coal companies.

“We’ve come, we’ve lobbied legislators,” he said when I reached him by phone this weekend. “As recently as last May we had an interview with the governor in his office. None of this has produced any effect. There are no changes in the attitudes of the government towards surface mining, and attention from the media is minimal or nonexistent. We understood, not because we like what we are doing, that this was the next thing that had to be done if we were going to carry our efforts any farther towards the elimination of surface mining.”

FRANKFORT, Ky. -- Fourteen protesters emerged from a four-day occupation of the Kentucky Gov. Steve Beshear’s office in protest of mountaintop removal mining before a crowd of over 1,000 people on the steps of the state Capitol Monday.

In a statement delivered before a cheering throng of supporters, writer Wendell Berry said, “We came because the land, its forests, and its streams are being destroyed by the surface mining of coal, because the people are suffering intolerable harms to their homes, their health, and their communities."

Wendell Berry, C.S. Lewis, J.R.R. Tolkien and the Dangers of a Technological Mindset

Genetic engineering in the foods you eat. Advanced surgical equipment. Military weaponry. The Internet and social networking. The stove in your kitchen.

Technologies are becoming more powerful and more pervasive in everyday life. What is a healthy attitude toward technology? What is the right use of technology? What technologies can be rightly used? These are perennial questions, but they grow more important all the time. They are also questions that cannot practically be ignored; failure to ask the questions is an answer in itself.

At least one cohesive approach to these questions can be found in the writings of C.S. Lewis, J.R.R. Tolkien, and Wendell Berry. All three authors address, in both their fiction and non-fiction works, not only attitudes toward technology, but also the philosophies behind these attitudes and the actions—and people—they produce.

Editor’s note: Kernel managing editor Taylor Moak has been working on a profile of Wendell Berry since October. The Kernel, which had planned to publish this story later in the semester, moved up publication because of the weekend’s events.

Over the years, he gained acclaim for literature that advocated a return to the land. His work and the state’s flagship universty were intertwined.

So in December of 2009, after Berry quietly removed the body of work he had loaned to UK’s archives, he knew that what he was doing would reverberate beyond his seemingly simple action.

“To me it’s a matter of principle,  of what I consider the proper role for the University of Kentucky in fulfilling its obligation to its state and its people,” Berry said.

As the sun rose on the Frankfort capitol in Kentucky on this beautiful winter morning, 14 anti-mountaintop removal activists were already in meetings on the third day of their historic protest. After marking the second night on the floors and chairs in their Kentucky Rising occupation of Gov. Steve Beshear's office, four of the sit-in participants, including the celebrated author Wendell Berry, appeared at the east capitol entrance for an exclusive interview with Huffington Post blogger Jeff Biggers and Kentucky filmmaker Ben Evans. 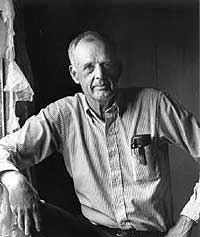 It is now Feb. 12.  By now we expected to be either in jail or bailed out.  Instead, by Gov. Beshear’s invitation, we are staying in his reception room in the Capitol.  We have had a good night’s sleep and are feeling fine.  The governor and his staff, the custodians and security staff of this building, all have treated us with hospitality and perfect kindness.  We have spoken much of this and of our gratitude.

A little to our surprise, the Governor spoke with us at some length yesterday, and listened evidently with care as our people bore witness to the abuses they live with every day.  He conceded graciously to two of our requests: that he would visit the home places of some of our people to see for himself what they are telling him about.  The conversation otherwise was a standoff.  We are far from agreement on most of our agenda of grievances.  But we feel that the conversation was useful because it made our differences utterly clear.  The Governor conceded our right to our opinions, but he believes that our accusations against the coal industry and its allies in state government are matters merely of opinion and personal feeling, without standing in fact, in law, or in principle.  He believes, moreover, that surface mining can be, and apparently that it is, carried on without damage to the land, the people, and the water supply.

We, of course, respectfully disagree.  We are relieved this morning by an accumulation of evidence that the first goal of our protest has been achieved.  State government’s official silence on the grave issues of surface mining has been broken.  Those issues have now entered the public conversation as they never have before.  Obviously, we are determined to stop the abuses of the coal industry, and to that end we are determined also to keep this conversation going.  We look forward to continuing our discussion with the Governor, and with anybody else who may want to talk with us.

We wish to say further—and this is extremely important to us—that our protest is against methods of mining that are abusive.  We do not oppose mining per se.  Our purpose is to protect our land and water.  And we most certainly bear no ill will against those who work in mines.

As the nation's beloved author/farmer philosopher Wendell Berry settled his 76-year-old lanky frame onto the floor of Kentucky Gov. Steve Beshear's office last night, he picked up a copy of The Tempest. But in joining other protesters in this extraordinary sit-in to halt reckless mountaintop removal mining, including a coal miner and inspector who dedicated 40 years of his life to the industry, a Harlan County activist whose brother was killed in a mine, a nurse who has served black lung-affected coal miners for decades, and some of the country's top Appalachian labor and history scholars, Berry was not taking part in any Shakespeare spectacle.

Update from inside the Capitol: Wendell Berry (Kentucky Rising)

Beshear Invites Anti-Coal Protesters To Stay In His Office Over Weekend (Lex18.com)